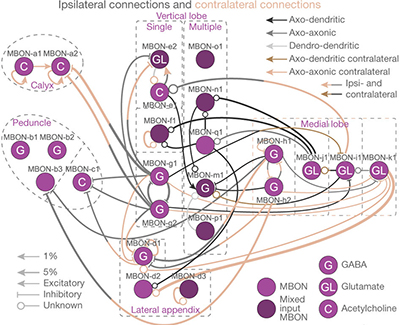 Mapping Brain Circuitry, One Neuron at a Time

A Johns Hopkins University mathematician and computer scientist joined an international team of neuroscientists to create a complete map, known as a "connectome", of the learning and memory center of the fruit fly larva brain, an early step toward mapping how all animal brains work.

Johns Hopkins’ Whiting School of Engineering professors Carey E. Priebe, of applied mathematics and statistics, and computer scientist Youngser Park from the Center for Imaging Science, were amongst a team of 17 scientists from eight research institutions in the United States, the United Kingdom and Germany who took part in this work. Read the Whiting School of Engineering's interview with authors Priebe and Park on their research charting these intricate connections in fruit fly larva brain.

The part of the fruit fly larva brain used in the study corresponds roughly to the cerebral cortex in mammals. Their analysis, published in the journal Nature, reveals patterns of connections among the six types of neurons that had previously been misunderstood or were entirely unknown, contributing to a better understanding of how this portion of the fruit fly larva brain works. This project could serve as a guide as scientists work their way up the animal kingdom and eventually chart connections among neurons in the brains of mammals.